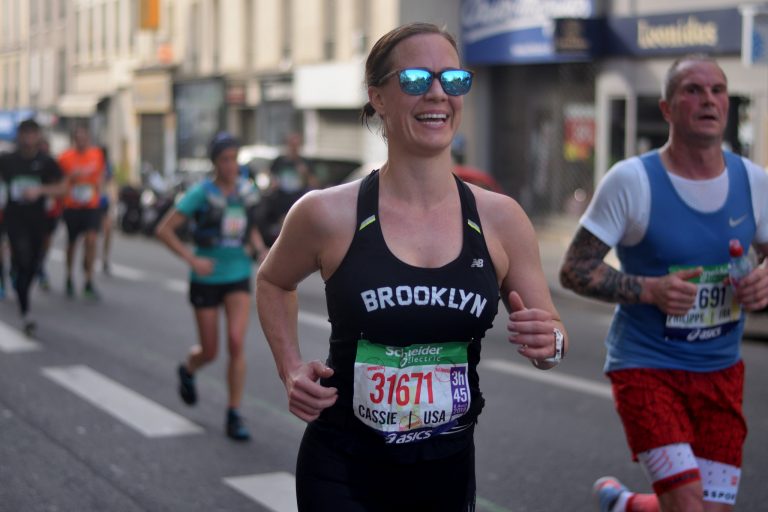 Posted by: Ben Mayersohn in Cheer Report 4 years ago

Immediately after cheering for the NYCRUNS Ladies First Half Marathon on March 25th, I packed my bags for Paris! Not because I knew I was going to cheer the Paris Marathon two weeks later, but to spend quality time working with a research group at a university there. I was lucky enough to be able to bring Lori with me (and she was lucky enough to have a good chunk of vacation days to use). The trip was a perfect balance of work and play.

Lori left on Friday, April 6th and my flight was scheduled for Saturday the 7th. It was the 405 to from Charles de Gaulle to John F. Kennedy airport by Delta Airlines – a 10:20 AM flight that happens every day.

The plan was for me to return home on said flight. I would attend the NYRR Run to Breathe on Sunday – the perfect race for springing back into cheering! I found out the Paris Marathon was happening on Sunday, and wished I had the opportunity to see it. But oh well! I was ready to go home.

A bird apparently found its way into the engine and caused some mechanical problems, resulting in the cancellation of my flight. I’ll spare you the details of my crazy airport experience, but I was rebooked onto a 10:40 AM flight the following day. This would have meant missing the Run to Breathe and the Paris Marathon. I was a little bummed out, but hey – I made it out of the airport alive and knew I’d be going home soon. 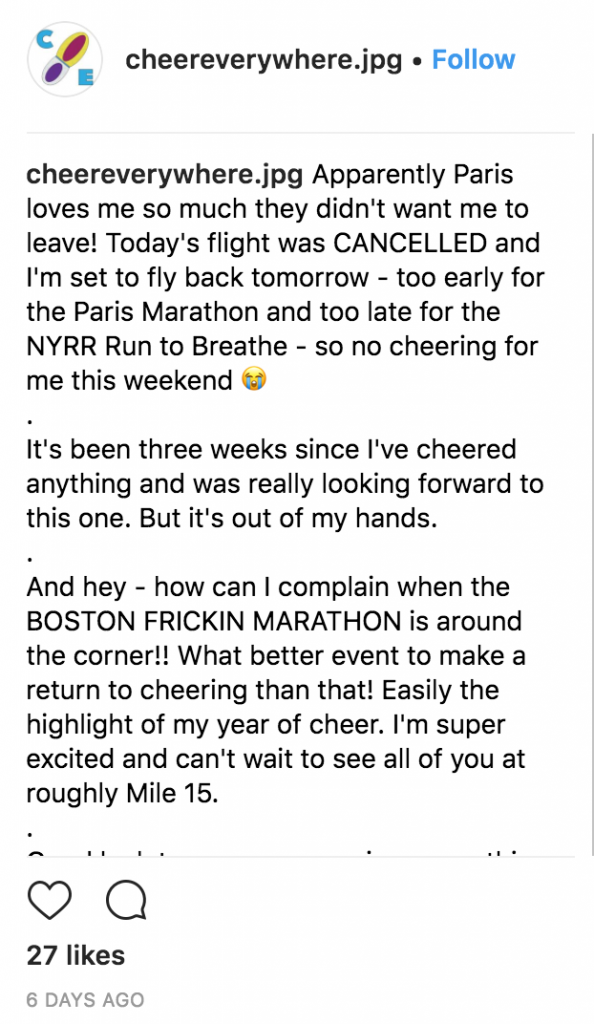 But then fate happened – I got a notification on my phone on Saturday evening that my flight would be delayed until the late afternoon. I would have a chance to cheer that morning!! 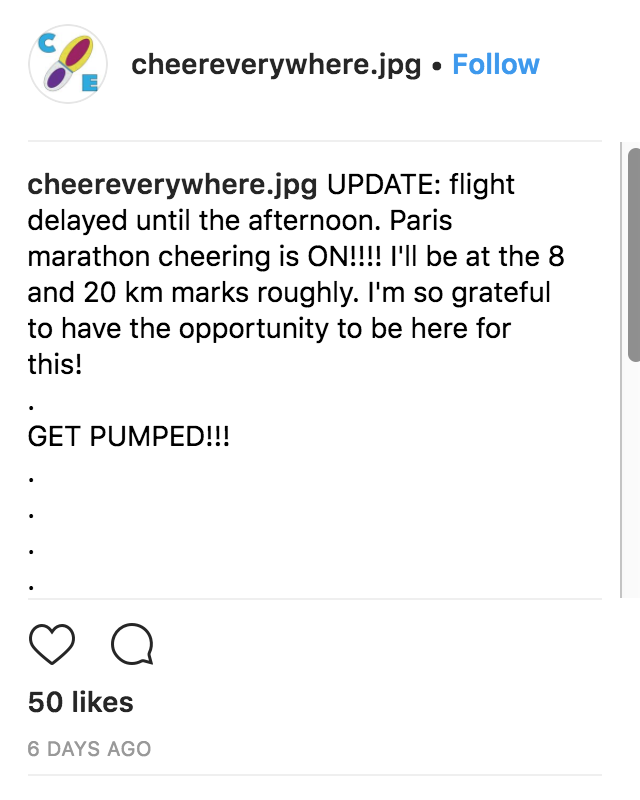 As you can see, people like good news more than bad news!

I was staying at the Mercure in Roissy en France (on the airline’s dime due the cancelled flight!), a short shuttle ride away from the airport. From the airport I took the RER B to Paris. I left the hotel on the 5:44 AM shuttle and arrived in Paris at around 7:30. It was a smooth trip all in all (much smoother than the trip back to the airport, which was complicated by transit strikes).

I decided to start at the 8 km mark and eventually make my way to the 20 km mark. Both spots were located along the 6 line. I wanted to be able to cheer for as long as possible before hopping on the train to head back to the airport. 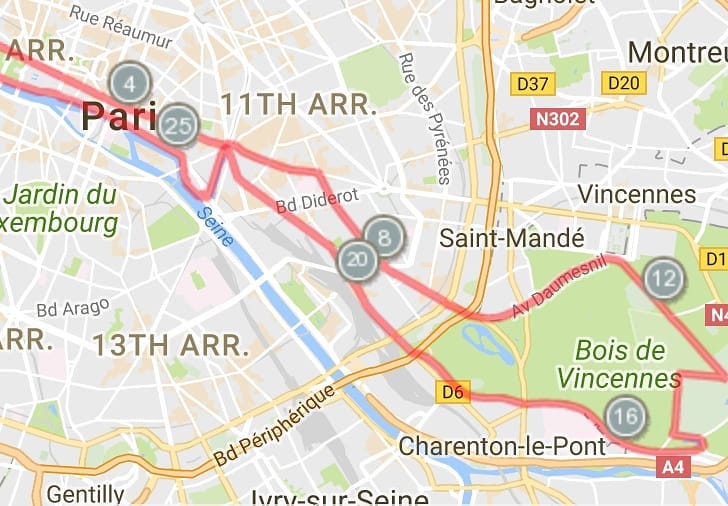 I guess we should close the roads…

Vehicle traffic was still streaming along the marathon route by the time I arrived – only twenty minutes or so before the handcyclists would come through! Eventually the volunteers dragged metal barricades in front of cars looking to pass, and after a discussion with the drivers, some cars would be let through while others would be redirected. There were no issues with stray cars on the course, so I suppose this was all according to plan, but I’ve never seen anything quite like that before! 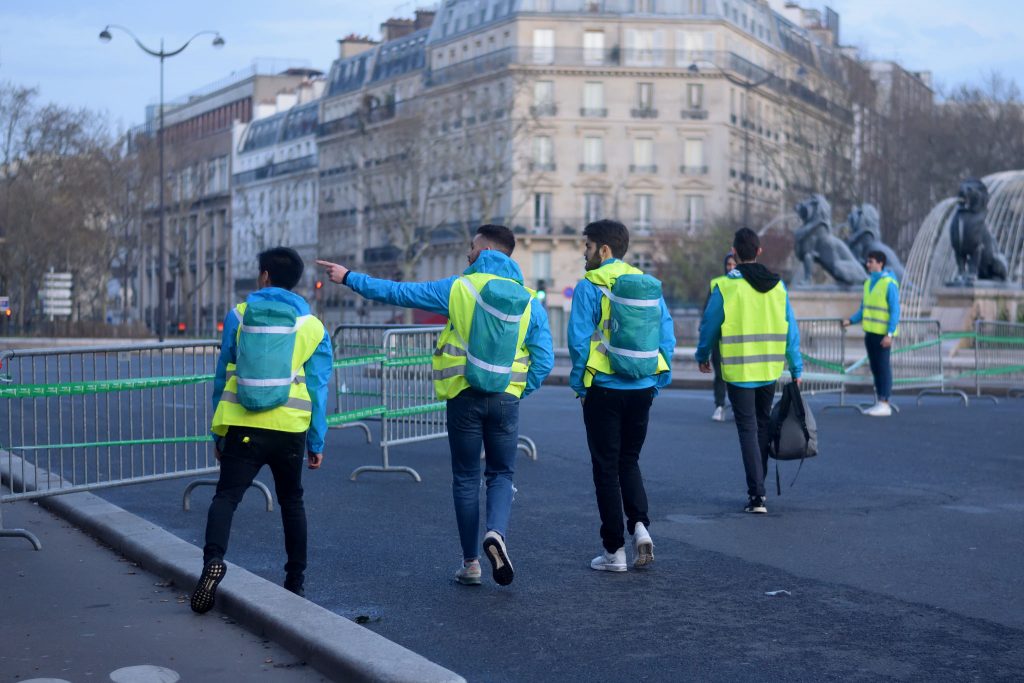 Paris sure came out that morning! There weren’t very many people lined up to cheer when I first arrived. But by the time the runners started coming through, I was but one person in a line full of spectators! 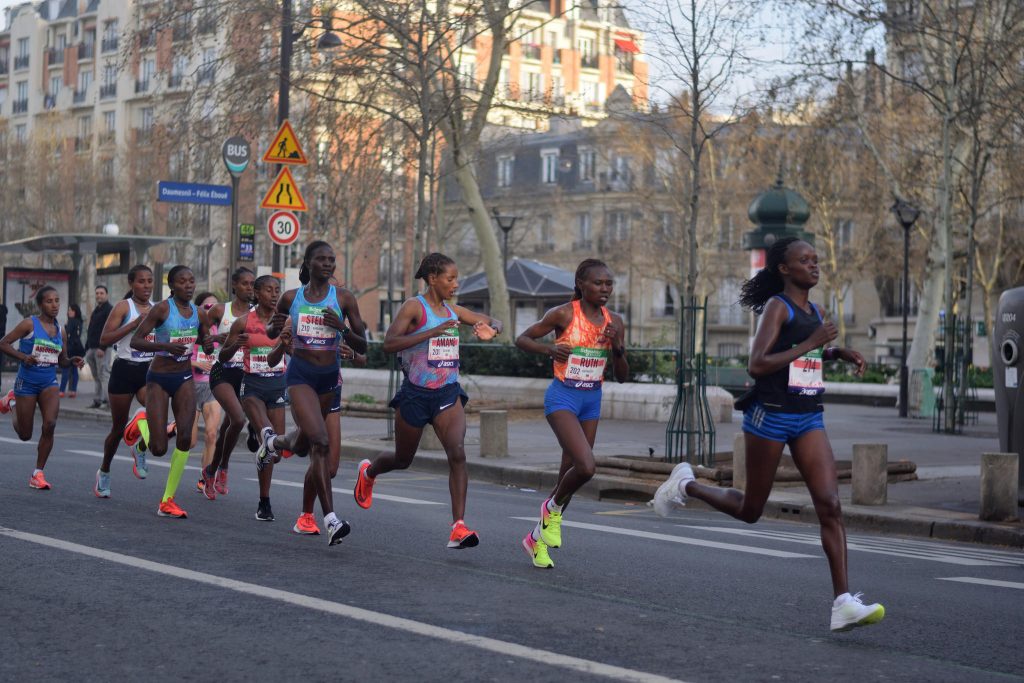 I was reading this thread on Reddit the night before to see what French phrases would be appropriate to say to the runners. This response caught my eye:

is what you would hear if you were standing on the side of the road watching racers of the Tour de France passing in front of you.

And that’s exactly what I heard while cheering! It’s pronounced “ah-lay” and means “Go!” I decided to stick with English – but I did order a French textbook the other day so hopefully when I return I’ll be confident enough to attempt some français! 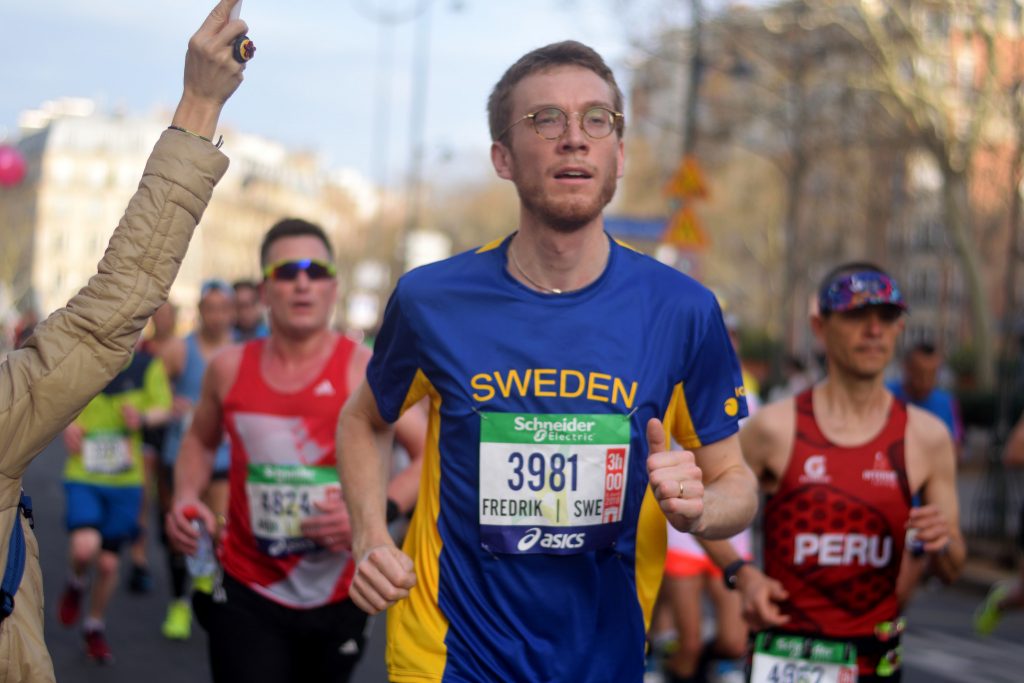 I wasn’t at the 8 km mark for all too long when I decided to change spots. It’s tough to cheer so early in a race as large as this. After only five miles the runners are still packed together. I knew by the 20 km mark they would have spread out more by pace, allowing me to get better (and more) photos of individual runners. So I made a run for it!

I got to the 20 km mark just in time to catch the lead pack of women make their way through. 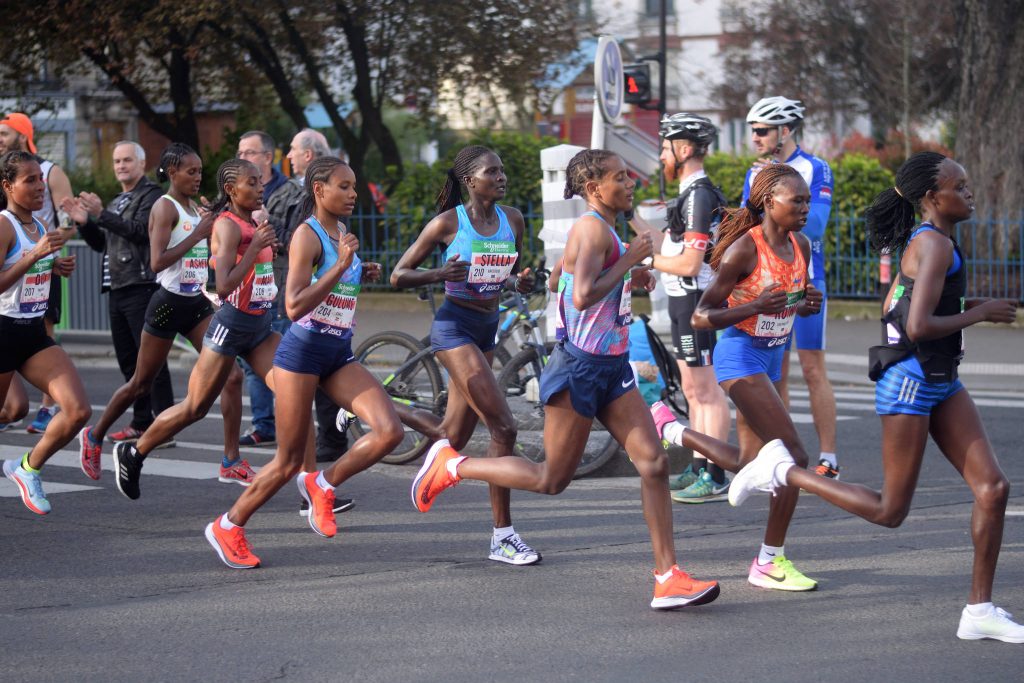 This was the perfect cheer spot. The 8 km spot was downhill and I didn’t have great visibility beyond what was directly in front of me. This spot was on an uphill and I had better views in the distance. 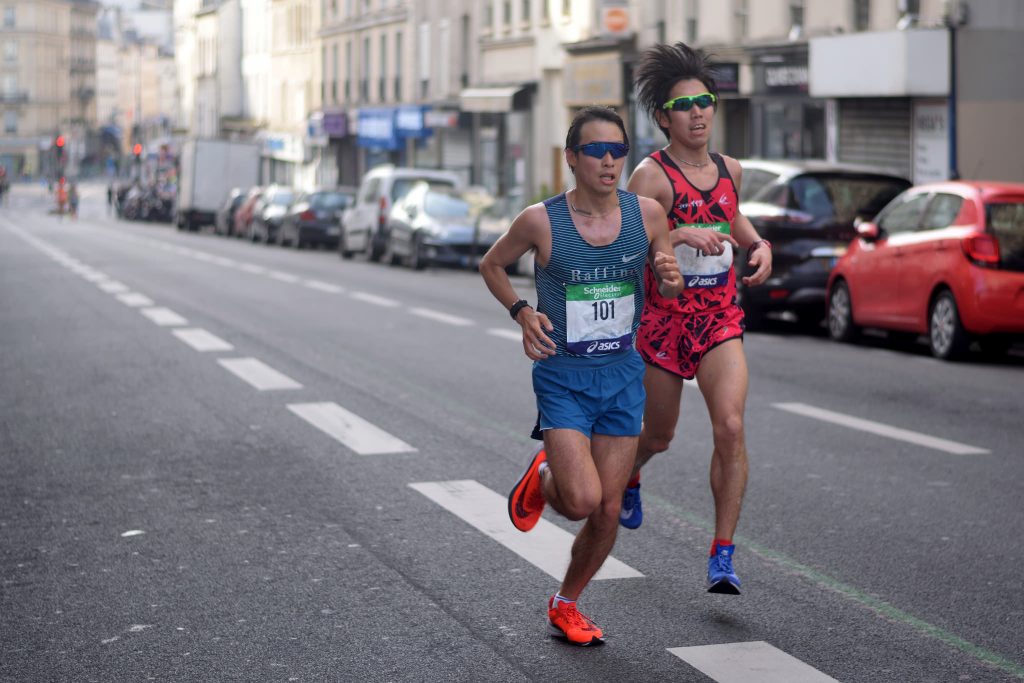 Again – the crowds were packed! Someone even brought a loudspeaker and used it to amplify their chants (basically the word “allez” over and over again – simple but effective). Paris knows how to encourage its (and the rest of the world’s) runners!

Another thing I found interesting about this course was the number of cyclists riding alongside the runners. I think some were pacing their runner friends, and others were just along for the ride. 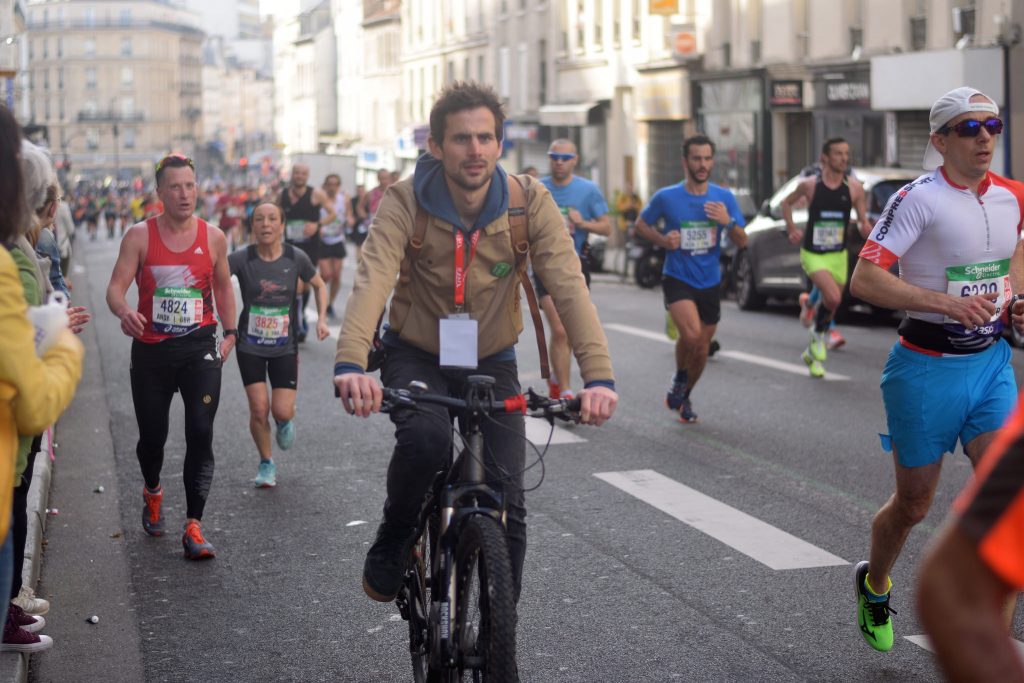 This guy had a PowerGel in his mouth and was wearing an Adidas Runners shirt, so he’s basically a runner on wheels. 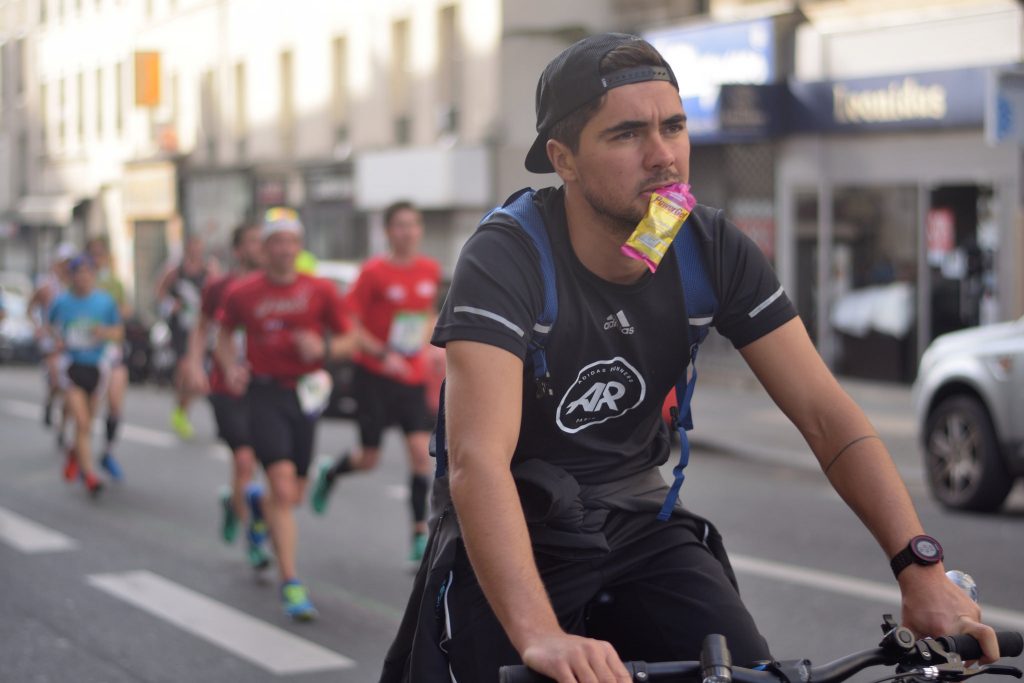 There were also lots of cyclists on the course before the race began – though that isn’t an uncommon sight at these events. Why not bike on the open roads before they become flooded with runners?? 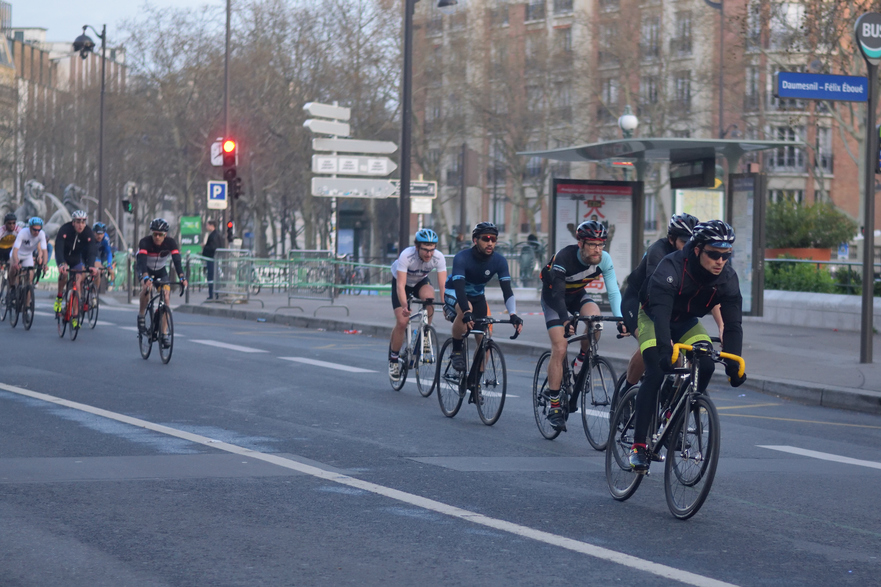 I see you, NYC runners…

The Paris Marathon draws runners from all over the place – including the US! So I tried to look out for US-based runners, especially those representing NYC running clubs. I got some photos of runners representing Central Park Track Club, North Brooklyn Runners, and NYPD Running Club. I also saw a Mile High Run Club runner but only managed to get a photo of his back (which did not have the MHRC logo on it). 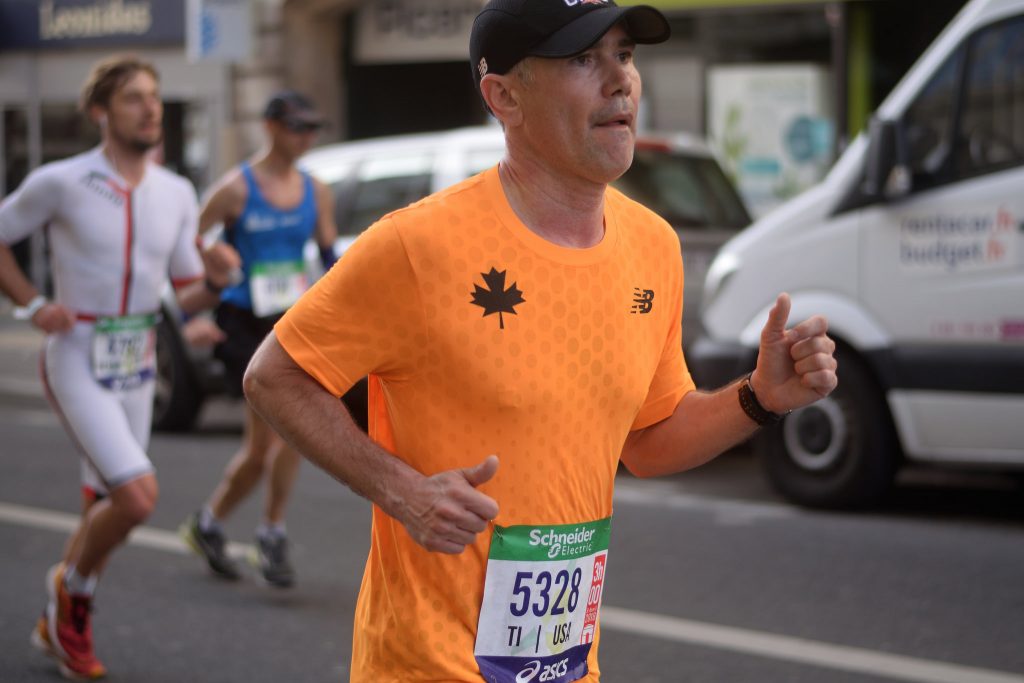 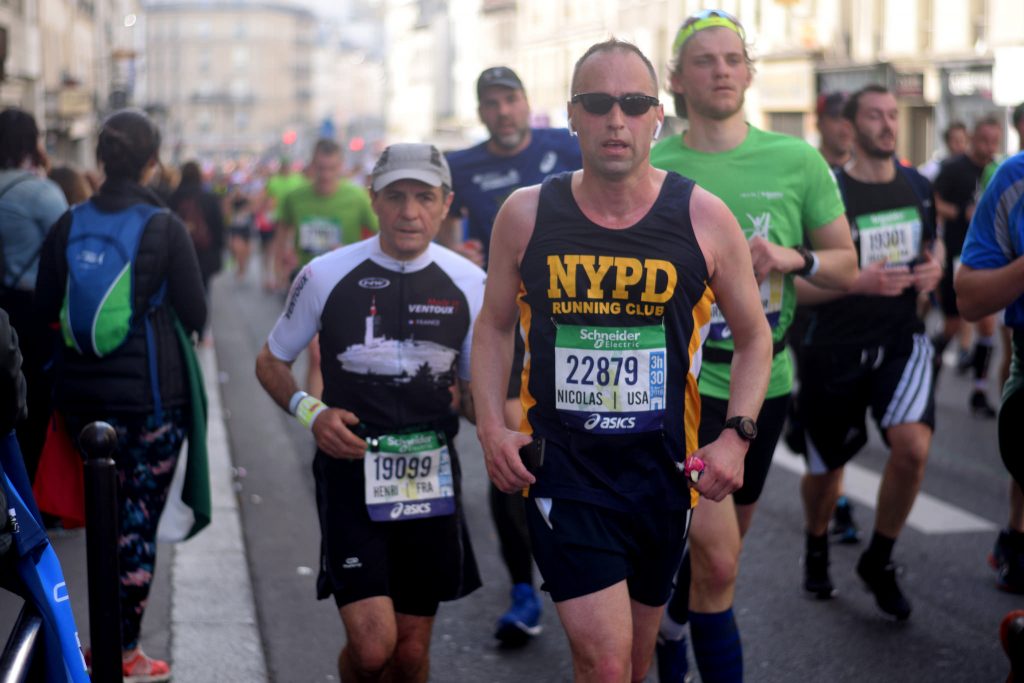